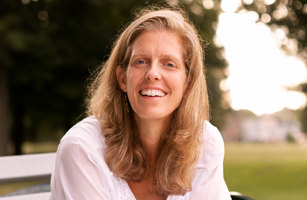 Our latest featured innovator is Louise Reed, CPA, a sole proprietor from Richmond and the founder of afloat, a startup that facilitates the sale and transfer of transferable tax credits using blockchain technology. Here, in Louise’s own words, is what led her to launch afloat and what the startup experience has been like for her. Listen to more from Louise in her appearance on the VSCPA Leading Forward podcast. Questions and answers have been edited for style and clarity.

VSCPA: What’s your explanation of what the blockchain is?
LR: Imagine SunTrust has a computer system that is keeping track of the fact that I have $100 in my bank account and you have $200 in your bank account. And we both know that there isn't really dollar bills and some shoebox with our name on it, but that's really on a computer somewhere, which account has how much money. And imagine the number of staff they probably have whose only task is to make sure that hackers from China, North Korea, anywhere around the world, are trying to constantly hack into that computer system to just move money around into a different account with their name on it.

I don't know how many staff there are in a bank, but I suspect it's quite a large number protecting that centralized accounting system. Now imagine an algorithm that keeps track of who has how much in their bank account. It's been in existence for 10 years without a single person controlling, not a single person needing to secure the security of that information, and that information is around the globe in a very hostile environment, and it's never been hacked.

VSCPA: Are people in the entrepreneurial world latching onto this?
LR: At the enterprise level, at publicly traded companies, I think they're so big they don't know how to implement this or what it means to them yet. I can promise you that a lot of people are threatened by it at the enterprise level, but how to incorporate it in their systems that already exist is probably a mystery, and so it seems to be taking off more in the startup world, where there's more flexibility and an ability to start from scratch on processes.

Apparently, Walmart, by September of 2019, is mandating that anyone selling them lettuce needs to put their lettuce on a Walmart blockchain. and Starbucks, I thought, was coming up with something about November. I haven't heard any details about that. I think a lot of these companies know about it, they are keeping it close to their chest, and a lot of us in this space are looking at regulations. There's a lot of uncertainty about the SEC, and no one wants to be not in compliance. Everyone wants to be in compliance.

VSCPA: How can blockchain technologies affect the CPA profession?
LR: The idea of triple entry accounting helped me see the world a little differently in the blockchain world with accounting. With double-entry accounting, we have debits and credits under one company structure. The idea of triple-entry accounting is that the third entry is tied to the third party involved in the transaction. I don't know for sure this will happen, but it is very technologically conceivable to me that in our QuickBooks file, instead of it being self-contained of only our company, will have an extra entry that ties on a blockchain to someone else's QuickBooks file so that the bill that I paid is there and come and it's tied and it's the same amount and we both acknowledge that that money went from me to you. So I see a lot more interconnectedness. I see a lot more transactions that don't need to be audited.

VSCPA: How did you apply blockchain technology to your new company?
LR: On April 10 of this past tax season, my friend, my longtime friend since growing up, approached me and said, “Louise, I have a half million worth of tax credits —  Virginia transferable land preservation tax credits —  that  I'd like to sell. Do you have any clients that would like to buy them?” And as soon as she said that, I was so excited. I could save my clients the money because they would theoretically be buying tax credits at a discount, I was helping my friend, and that looks like the hero on all sides of the equation.
As I got deeper into helping this exchange happen, I quickly learned that none of my clients wanted to be revealed in name or identity, to my friend. I also realized that I was in a little bit of a loyalty bind. I didn't think it was my place to figure out what price was fair.  Because of this anonymity issue, I kept sort of finding myself in the middle of something I didn't want to be in the middle of.

I thought to myself, “Too bad that I'm in the middle of something I don't want to be in the middle of, and this is a perfect use case for a smart contract on the blockchain.” That's exactly what it's designed for, to have buyers and sellers interact directly with each other on a secure, transparent method, and to have something algorithmically allow this transaction to happen without the friction of CPAs and lawyers in the middle.

VSCPA: What tax credits are going to be involved in this?
LR: We are targeting land preservation tax credits in Virginia, because that's where there's the most volume of tax credits. We are also targeting Wisconsin historic preservation tax credits because the Department of Revenue in Wisconsin seems to be more open to the possibility of receiving emails and approving of transactions on our website, and that will add a lot to demonstrate how this process can add security and reduce the time delay in getting these transfers approved and solidified.

VSCPA: What have you learned along the way?
LR: I love being in the innovative space. I love the types of people it attracts. I love the challenges. The programming is so new that it's not like you can find a CPA who's been doing tax returns for 15 years and can do it in their sleep. There's a learning curve for these programmers. The space moves so, so quickly. Therefore, communication needs to be paramount, and that's a fun challenge.

VSCPA: What would you like your fellow CPAs to know about blockchain technology?
LR: The technology of blockchain is inevitable. Even if regulations in the United States aren’t supportive, this technology is so efficient in global markets that if the United States doesn't catch up, we will be left behind, and that's already happening to some degree. So I would just like to suggest that that this technology is here to stay and I would also like to suggest that it doesn't need to be associated with the black market and things that are scary. That there are a lot of use cases, and there are a lot of really exciting use cases, and for those of you who want to explore and adventurous, it's a really fun space.