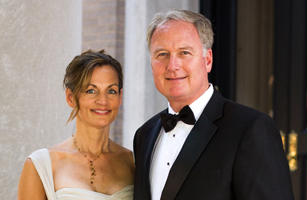 If you have time, watch this video before you read this profile. Pay special attention to the interviews with Jamie Walker, CPA, and Daphne Swanson, CPA. The volunteer event they’re describing turned into a marriage.

A little background: Daphne (spoiler alert: she’s now Daphne Walker, CPA) is the president at Junior Achievement of Central Virginia (JA). In 2011, JA was building its Finance Park, which educates students about money management by taking them through the process of managing spending and creating a budget.

Tom Schaughness, an employee at Jamie’s firm, WalkerChaney, CPAs, contacted JA to see if his firm could help paint as part of the VSCPA’s CPA Day of Service 2011.

“I initially didn’t think it would work because the Day of Service was in September and we needed it painted in August,” Daphne said. “Tom said they would do it in August and count it towards their day in September. So when they came to paint in August, that’s when we met.”

With the spark lit over yellow paint and lunchtime pizza — Jamie says he got more paint on himself than on the walls — Jamie found reasons to stop by the JA offices several times before asking Daphne out for a glass of wine. Less than a year later, they were married at St. James’s Episcopal Church in Richmond and honeymooning in San Francisco.

“Financial literacy is an important issue to us, and it’s a very important part of their program,” Jamie said. “We talked about it from time to time over the next three or four months, had a glass of wine after work, and ended up getting married the next year.”

This is the second marriage for Jamie and Daphne, who each have children from their first marriage. Jamie has two adult daughters, while Daphne’s daughter, Sydney (12), lives with them. Daphne says Sydney “approved” of the marriage.

Jamie and Daphne share a passion for promoting financial literacy that found a natural outlet in the Finance Park. With that in mind, it’s safe to say that the financial arguments that many couples fall prey to won’t be a problem in this marriage.

“We’re both on the same page financially, which is helpful,” Daphne said. “That alleviates some of the arguments that other couples may have. And he can talk with me about work and I can talk to him about work and we both understand.”

That understanding has led to a rock-solid marriage even after such a whirlwind courtship, with the VSCPA and Tom Shaughness as inadvertent matchmakers. While Jamie has been helping out the Society for years, spending time as the chair of the Board of Directors and serving as the current chair of the VSCPA PAC Board of Trustees, the couple has gone back and forth on what to do for Shaughness.

“We’ve talked about getting him a gallon of yellow paint, specifically the yellow paint, to thank him,” Daphne said. “If it wasn’t for him, we wouldn’t have met.”

Both Jamie and Daphne do extensive volunteer work outside the VSCPA as well. Jamie serves on the Board of Directors of Children, Incorporated, and is involved with the West Richmond Businessmen’s Association. Daphne is currently on the Henrico Business Council cabinet and is a member of the board at the Tuckahoe YMCA. Both are heavily involved in church activities.

But none of those volunteer activities have quite the resonance of that August day at the JA offices. A chance meeting, a bucket of yellow paint and a few slices of pizza resulted in a happy marriage.

“Getting out and doing something like that is very, very important,” Jamie said. “I’m thankful for the CPA Day of Service, because had we not scheduled that activity, I wouldn’t have been down at JA spreading paint.”

“It’s an extra benefit to volunteering that none of us counted on,” Daphne said.