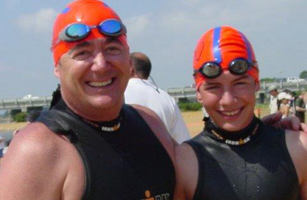 Councilor, Buchanan & Mitchell (CBM) is returning to Washington, D.C., and VSCPA member Pete Reilly, CPA, is in charge of the move. It’s not the first time he’s jumped into unfamiliar waters.

Nearly 20 years ago, after hurting his back playing basketball, Reilly (right, with his son, Duke) needed another physical challenge. And he wasn’t settling for any half-measures — he chose the Great Chesapeake Bay Swim, a 4.4-mile race across the iconic bay.

“Going through physical therapy, one of the things they said I could do was swim,” he said. “I swam in high school and coached swimming for years. After about 15 years of not swimming, I got back into it and saw it as a challenge.”

At the time, the race hadn’t instituted an entry lottery, so Reilly signed up and got going. Since the event is held in June, that meant a great deal of training during tax season, but Reilly was up for the challenge.

“You just have to do it first thing or forget it,” he said. “Between 6 and 6:30, I’m in the water. Every day in March and April. You start out three days, and then four days, and by the middle of March, it’s five or six days a week.”

The race has provided its share of challenges for Reilly in the 16 times he’s finished (most recently with a time of 2 hours, 19 minutes and 34 seconds). Those obstacles have ranged in seriousness from hypothermia to encountering a submerged log, which he says “scared me beyond belief.”

Most recently, his cap came off and he had his goggles broken while trying to retrieve it.

“I thought they would pull me out of the water because they have to follow you with these bright caps,” he said. “I turned to get my cap and got slugged in the right eye and broke my goggles. I got my cap back on, got into the chute between the bridges and my cap came off again. There were so many people trying to get between the bridges. I was starting to freak out, but I regrouped.”

The race takes place entirely in Maryland waters, starting north of Annapolis and ending at Kent Island. That’s where Reilly has plied his trade since joining CBM after graduating from Marquette University in 1978. He briefly worked for the Foster Wheeler construction company, but left to focus on the CPA Exam. He returned to his hometown of Alexandria and “sent a resume to every firm in the Yellow Pages” before starting at CBM in 1979. He’s been there ever since and was elected president and managing partner late last year.

He just missed out on CBM’s previous stint in Washington. The firm was founded in the District in 1921 before moving to Bethesda, Md., in the 1970s.

Reilly estimates that his firm does 40 percent of its business in Maryland, 35 percent in Virginia, 20 percent in Washington and 5 percent elsewhere. CBM’s location in the Washington metro area makes that a fact of life, which means keeping up with requirements in all three jurisdictions.

That’s why Reilly maintains memberships in the Maryland Association of CPAs (MACPA) and the Greater Washington Society of CPAs (GWSCPA) as well as the VSCPA. The flow of information from three sources has enhanced CBM’s work, to say nothing of the myriad educational options.

“CPE is probably the top benefit,” he said. “However, there are good blogs….Getting all the information from the different associations is terrific.”

When asked what he likes most about his employer, Reilly cites his coworkers and the close, casual interactions he has with them. He stresses a family atmosphere, encouraging CBM’s employers to volunteer in the community and at their children’s schools.

The Chesapeake Bay swim turned into a family affair for him a few years back, too. His son, Duke, joined him for the race once he reached high school. At the time, he was the youngest swimmer in race history at 14 years, three days, although younger swimmers have completed the race since then.

Reilly has three other children — Brendan, Bridget and Conor. His wife, Crissy, has attended all of his races despite her distaste for the event.

“She’s been at every one of the bay swims,” he said. “She doesn’t like them. After the very first one, she said I was never doing that again.”