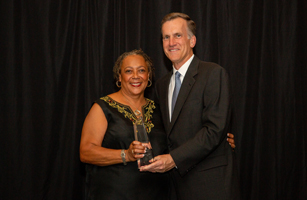 Vivian J. Paige, CPA, is a sole proprietor and senior lecturer in accounting at Old Dominion University (ODU) in Norfolk, but that’s not the main reason why she’s being honored as the VSCPA's 2019 Outstanding Member. No member made a more important contribution to the profession than she did in helping the VSCPA overcome numerous obstacles to get tax conformity legislation passed.

Paige has been an asset to the VSCPA’s advocacy efforts for years, but the conformity issue was particularly well-suited to her areas of expertise: government and taxation. She’s spent the last several years of her career working to educate different groups of people about both issues, from her tax classes at ODU to her role as an opinion columnist for The Virginian-Pilot in Norfolk.

All that work in sharing information paid off nicely this past winter when the VSCPA needed to put out a massive information campaign to get conformity legislation passed. Members’ and legislators’ levels of information about conformity varied widely, with the implementation of elements of the federal Tax Cuts and Jobs Act (TCJA), the first major tax legislation in more than 30 years, complicating matters further.

Enter Paige, who was the primary author of the VSCPA’s opening conformity salvo, the whitepaper “Virginia Tax Conformity: 2018 and Beyond.” She stayed involved throughout the process, helping the VSCPA craft its conformity messaging and serving as a technical resource for VSCPA staff. (It’s worth pointing out here that none of the staffers who took an active role in the conformity campaign are CPAs, making that expertise even more valuable.)

Paige consulted on member resources, participated in an explanatory podcast and helped lead a conformity session at the VSCPA’s E-Summit conference. All told, it’s hard to imagine the Society getting such a politicized issue through a divided General Assembly in a short session during an election year without her contributions.

“I think [the short session] probably had a bigger impact than people realized,” Paige said. “First of all, because it’s not a budget year, the session is 15 days shorter. It meant there were only 45 days to be able to digest the information. Yes, we had some information in August when the [Chainbridge] report [commissioned by the Virginia Department of Taxation] was released, but the full General Assembly didn’t go into session until January.”

Paige’s patient approach to informing tax practitioners about the ins and outs of conformity is an extension of the way she handles her classroom at ODU. It’s also reflective of the way she learned about taxation herself. She started out as a music education major at Hampton University, then transferred to ODU and switched her major to accounting.

Not only did the switch not take right away for her, but she burned out quickly after working every summer. So she took a year off from college, working for the U.S. Internal Revenue Service (IRS) to make money and get a look at accounting from a different angle. That decision made all the difference in her career.

“I saw the difference in the way tax was taught at the IRS,” she said. “Before they let me put my hands on a return, I sat in a class from 8–5 from Monday to Friday for six weeks. The way it was taught was a holistic approach to taxation.

“In college, it’s about the stuff that’s easy to memorize and test on. It’s a lot of exceptions to the exceptions and not a lot of general rules. Another approach is to teach it as how you fill out forms without any information on why you fill out the forms and what these numbers are.”

True to her own experience, Paige says her best students are the ones with no previous tax experience. They’re the most receptive to her philosophy of teaching the “why” of taxation along with the “how.”

“If you understand the why, you can pretty much figure out the how,” she said. “How exactly does this translate into completing this form? You have to make the connection. Teaching has certainly made me much more aware of how much there are gaps between the how and the why, and my work with the textbooks has allowed me to see how the why doesn’t translate into the how when you’re not preparing returns.”

Paige also contributes to accounting education by consulting with textbook companies, providing technical guidance, checking solutions to problems and making sure supplementary materials are correct. But the bulk of her mental energy in that regard is directed toward thinking of solutions to the problems facing the CPA pipeline.

Part of that is in getting CPAs more involved in curriculum development and finding ways to allow professionals to teach without getting a master’s degree. But part of it goes back to well before college — when, for lack of a better description, students are not learning how to learn.

“[Standards of Learning] have taken that from them. It’s memorization and regurgitation,” she said. “Students haven’t had to learn because they’re just asked to memorize and regurgitate because it’s easier for people to grade. The CPA Exam is moving toward higher-level skills, as is the rest of the world. If robots take over the world, we’d better have some critical thinking skills. And that’s hard to do because the instructors have to work harder and the students have to work harder.”

It’s that kind of thinking and consideration that earned Paige numerous accolades. In addition to her VSCPA honor, she was recently named one of ODU’s three distinguished teachers for 2019. While those are huge milestones, she seems even more excited about being honored by one particular student who plays on ODU’s women’s lacrosse team.

That student picked Paige as her Gameday professor, which means she got a tour of the lacrosse facility, watched the team practice, attended a game and tailgated with the team after. While Paige knows almost nothing about lacrosse — she says, “They play with a stick that’s got a wicket on the end, and I think they throw a ball” — the honors that come directly from students are as meaningful as anything she receives from the profession.

As Paige said, “This particular player named me and her advisor said, ‘Hold up. You got a C in her class. Why would you name her your Gameday professor?’ And she said, ‘Because I passed.’”