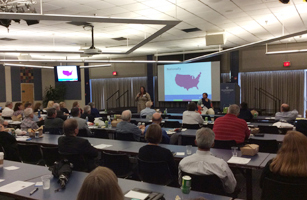 Quality, education, the CPA pipeline and advocacy were the key topics as the VSCPA hit the road in June with its Professional Issues Updates (PIU) across the state.

One more in-person PIU is scheduled for Nov. 12 at the Southwest Virginia Higher Education Center in Abingdon, and Virtual PIUs are set for July 22 and Sept. 23. The July event will feature representatives from the Virginia Board of Accountancy (VBOA), and the September event will focus on the VSCPA Educational Foundation and the VSCPA’s work with the CPA pipeline and young professionals.

All PIUs, both in-person and virtual, are free to attend. The virtual PIUs offer 1 hour of CPE credit, while the Abingdon PIU offers up to 2 hours.

Peters gave a presentation on issues affecting CPAs today, leading off with the issue of audit quality, recently brought into the news by the U.S. Department of Labor’s (DOL) report on audit quality for employee benefit plans.

Audit complexity is at an all-time high, and the accelerated rate of change and increased regulatory scrutiny has audit quality in the spotlight. The VSCPA and other industry groups are focused on improving quality through various initiatives, ranging from pre-licensure training to enhanced peer review and practice monitoring.

Peters’ presentation also touched on the CPA candidate pipeline, which shows troubling signs despite the credential’s strong reputation. Only about half of U.S. accounting graduates sat for the CPA Exam in 2014, and the trend line for Exam takers has gone down as the number of accounting graduates has remained steady.

Two-thirds of accounting majors graduate with the intent of becoming a CPA, while 30 percent say they don’t plan to sit for the Exam. However, only half of the first group actually winds up taking the Exam.

A recent research study on the CPA pipeline indicated that the perceived value of the CPA credential remains high. Respondents cited the stability of the CPA career and the credential’s value relative to the MBA and other credentials as factors in their responses.

However, environmental factors often discourage, or even prevent, young accountants from sitting for the Exam. One respondent said, “My employer does not care a whit whether I get a CPA or not.”

The American Institute of CPAs (AICPA), which develops the Exam, plans changes to make the process more convenient, including extending the 18-month period to pass all four sections, reducing the blackout window and allowing retesting of a failed section.

The Future of Learning

How do you deal with the variety of ways people learn? That was one of the questions tackled by Mawyer and Newsom-McCurdy in their presentation, “The Learning Evolution.” And it’s one of the educational issues being tackled by the profession as a whole.

The three types of learners are:

While polling at PIUs suggests — albeit with a small sample size — that most CPAs are visual learners, the trick is in designing learning opportunities that work for all three types. While the AICPA and the National Association of State Boards of Accountancy (NASBA) are at the forefront of the effort, the VSCPA is playing its part as well, such as with its recently launched nano-learning opportunities.

Another major shift in continuing education is the move from input-based to output-based learning. That means giving credit in more nuanced ways than “This person sat in a seat for two hours.” Judging whether a CPA understood the content means evaluating how they apply the information they received. (Look for more on these topics this month on VSCPA.com.)

Regular VSCPA.com readers won’t find anything earth-shattering here, but Walker took the time to detail the Society’s most recent advocacy successes, notably the repeal of the Virginia state income tax debit card mandate. That bill, officially signed into law by Gov. Terry McAuliffe on May 27, repeals previous legislation mandating that Virginia taxpayers receive their state income tax refunds via direct deposit or prepaid debit card. The debit cards proved unpopular and costly, and the VSCPA, along with other groups, successfully pushed for their repeal and the reinstatement of the paper check option.

Other bills Walker highlighted were:

Walker also discussed the importance of voting in the November elections, particularly in 2015 with the retirement of Virginia Sen. Walter Stosch, CPA (R-Henrico), a VSCPA member and the only CPA in the General Assembly. She then gave an update on the VBOA’s current projects, including a single renewal date for all licensees, regulatory changes related to the Statement on Standards for Accounting and Review Services (SSARS) 21 statute update, and refinements to the Active — CPE Exempt license status.

Federally, the VSCPA is watching issues including Mobile Workforce legislation, a proposal to limit the use of cash accounting for service organizations, and U.S. Internal Revenue Service (IRS) funding.

The VSCPA also uses the PIUs as one way to keep a finger on the pulse of the profession. At each session, we polled attendees with the question, “What is the greatest challenge facing you in your job today?” We grouped responses into the following categories:

“I really like the partnership that is being created with CPE providers and the various options of face to face, online, webinar and self study.” — Patty Nelson, CPA, Southern Virginia Higher Education Center

“I was surprised to hear (if I heard correctly) that only 5 percent of VSCPA members contribute to the PAC. Also, I am grateful to learn that the VSCPA is working hard to help students become CPAs.” — Anonymous

“Seminar leaders had a lot of knowledge and kept the seminar very interesting with group participation.” — Anonymous

We Want to See You

PIUs are the VSCPA’s way of engaging our members and putting the information you need to know front and center. If you weren’t able to attend one in person, please sign up to participate virtually on July 22 and Sept. 23. We look forward to seeing you!